Malphas
Malphas is fourth of the Light-Born that you are to kill in order to help Narathzul Arantheal in becoming the Shadow God. He believes that Narathzul is wrong about his ambition to create a better world. According to Malphas, all world reformers are always the same: in the end: they wade in the blood of those who they wanted to liberate. Nothing is perfect.

Together with him, 9 Energy Wells will appear. They have healing powers, so you will not be able to kill Malphas unless all the energy wells are deactivated. In order to kill him, you need to remove an Energy Stones from each of the wells (you should have 9 energy stones in your inventory in total). The easiest way to remove the stones seems to walk as close as possible to the wells (as if almost stepping on them) and look into the well using spacebar all the time, until you finally open it and a stone to remove will appear. Do so with the other wells. The deactivated wells will change their appearance and as soon as you have removed all the stones, God Malphas will stop regenerating his hitpoints and will finally die.

The Sins of our Fathers 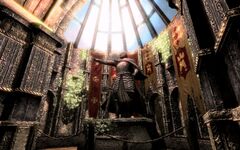 Malphas in Ark's Museum in Enderal 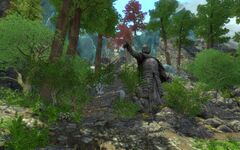