Back to Main Quest

The guards fear of the attack from the Battlemages stationed outside. Morten asks you find something that would barricade the main gate so that the mages would not break it open. Morten will hand you the key (Morten's Mine Key) to the Shadow Song Mine, upper entrance. 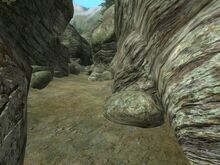 Find the Upper Entrance to the Mine[edit | edit source]

Make your way up to the Shadow Song Mine Upper Entrance. The fastest and the most straightforward way is simply by following the red marker on your map. Once you are approaching the mine entrance, you will have to go through some narrow corridors that will ultimately lead to the mine's entrance. Enter the mine with the key that Sentry Morten gave you. 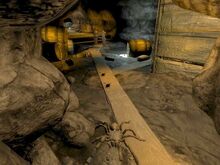 The right way will lead you to one spacious room where a few spiders will mercilessly surround you, all at once. Taking a glance aorund the room you should perceive two sturdy shovels attatched to the wall (if you are lazy, just follow the green questmarker). Taking the shovels will trigger a quest log update stating that the shovels will make a good support for the gates. Take the shovels back down to Morten.

When you approach Morten with the shovels, he will be defending the site form the raging Mages. Although he seems occupied with the fight, talk to him. He will state that he does not need the shovels anymore, as the mages managed to break through the gate (he needed the shovels to support the defences). Follow the quest as it evolves. 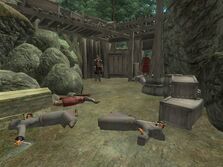 Just as you are approaching, the mages burst through the gates. DO NOT cross the gates yet (this will lead to scripted death). After a skirmish and 5 dead mages, the quest is updated again, and you can finally leave the restricted area for most of Nehrim. Speak to Morten to finish the quest. The shovels are not necessary anymore. The shovels, however, should be removed from your inventory. Your quest log suggests that you might speak to Porim before leaving the area.

Journey to the Abbey

The use of the console is same like in Oblivion. Description how to use console commands can be found

Retrieved from "https://nehrim.fandom.com/wiki/Under_Siege?oldid=36750"
Community content is available under CC-BY-SA unless otherwise noted.